the land below the wind 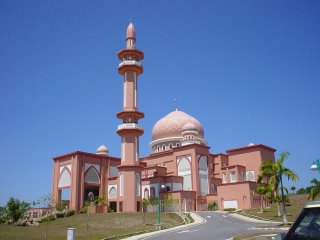 No, it's not a fart joke and it's got nothing to do with the wide expanse of thigh area upon which I sit. It's Sabah, a lovely place which I am proud to call, not home, but my birthplace.

Kota Kinabalu is the name of the capital city where I grew up. It's a beautiful little place which began as a little dock town along the coast. Wedged between the warm blue sea and a little ridge of land, the township was eventually forced to reclaim land from the sea. Why is it called reclamation? Surely it should be called appropriation or colonisation of said water.

Anyway, it was idyllic, hot, crickety and home for me until I left for boarding school at St Hilda's Anglican Girls' School (or St. Hags as our rival scools would call us) in Perth when I was about 11.

I've been home few times since I finished learning in 1996 and went straight to work in KL. In the space of a few years, KK has turned into another smallish concretised place, though it still retains some bits and pieces I remember fondly.

We used to spend every day swimming at the golf club in Tanjung Aru, the Kinabalu Golf Club, right next to the Yacht Club. I remember digging large holes in the beach while our parents socialised nearby on the club grounds. We would dig and dig and dig till the layer of brown sand disappeared and a black, quartzy sand appeared, oozing inky stinkiness (oh yes, it stank to high heaven).

We would play adventures and go roaming up and down the beach, hearing shrieky warnings every now and then as Mum would come to the edge of the club grounds and yell for us to turn back or else!

The water was always brown, because it was so shallow. You could walk about 50 metres some days, and still be only thigh-deep. Jellyfish would come in like waves of gooey, rubbery and yukkily tentacled underwater sheets. They were horrible, but sometimes fun as we would dare each other to run out from the shore to hop onto a huge tree trunk that had floated in from the sea and beached itself on our beach.

Then it was almost always still. the highest wave I remember was one about a metre high, during a particularly stormy day. It rose, crested and crash, and that was it.

When I went to Perth for studies, I found myself along the coast again, and though I loved the pristine beaches and the shocking blue of the Indian Ocean, I enjoyed the cold and wet weather so much more. I imagined myself the heroine of a Victorian novel, wrapped up tightly against the chill winds. That I looked more like the heroine's ethnic parlourmaid and behaved more like the hero's sidekick friend didn't faze me.

And of course, my mother's hometown of Itea, in Greece, is a little crusty gem lying in a bay between the Pelopponese straits and the Parnassos mountains, home to legendary places like Delphi and Thebes (you know, where Oedipus wreaked his havoc).

So I guess the sea has always been my home. And although I haven't lived near the sea in nigh on 9 years, I still consider it home, I guess. The first 6 months in KL were fun and exciting, but come the seventh month, I felt a horrible crick in my neck and back, and a great burden bearing down on me every time I drove through the concrete and the dirt.

From the ground, KL has no sky. It's only when you see KL from afar that it becomes beautiful. I got used to that suppressing feeling, and found beauty in my life and my dwelling.

My dream home would be atop a hill or cliff overlooking the sea. I realise that a lot of things that I want for myself and for my family are deeply rooted in how I was brought up and where I was brought up. Also, I remember that as a child, no matter how much we travelled, and how many different and beautiful places we saw, I would always find the time to create a little space for myself to which I would retreat on my own.

I would demarcate a line between myself and my sister on the back seat of our rented car, or turn on my walkman and gaze soulfully into the distance as Sting, INXS and the Communards played, or simply zip myself and my private things into a sleeping bag and shut my eyes.

So I guess not being exactly where I want to be is not such a big thing, maybe because I also enjoy retreating into my own world. Nowadays, I guess it is writing or being alone without the family.

So spending most of my formative years in a beautiful place hasn't spoiled me for the big city. I do enjoy the hustle of a fast-paced city, but it's the grime and the bad attitudes that send me back to my little hole to ease away the headaches.

Wish I had a photo of KK to post, but I need a scanner. So, here is a photo I have on my computer, which doesn't say much about the landscape, only the colour of the sky. The mosque is on the new university campus just north of the city limits. Pink and clean, but at the time unutilised.

If I find more, I will upload.

Came across ur blog in Patrick's blog.

Saw ur name and remembered u were my classmate, in St. Agnes, Likas. Do you still keep in touch with Sharon Tan or Jocelyn? Met with Sharon once in KL before she migrated to Australia in late 80's. Since then have lost contact.

Hi Hmmmm. I did get in touch via email with Sharon but have not seen Jocelyn since I left. Who are you by the way? I can't access your blog...

It's me, Arfah Basri. You'd probably have forgotten me, I moved to KL since age 10. So was in St. Agnes till Std 3. That was long time ago.

Btw, my blog is set private but you can email me at m_arfah@yahoo.com. I'd love to get in touch with Sharon, please forward her email to me.