a place in the son 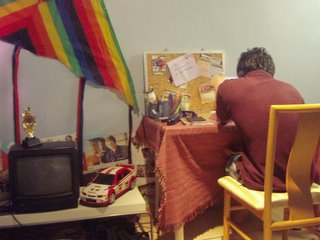 Some shots from the info sitcom we are shooting, for one of the loval government stations. The brief we were given was information for children. We thought, ugh. Then we offered a sitcom situation where three likeable kids learnt about teen issues by themselves - a proactive, positive and pristine. Happily, we were given the go-ahead and are now in production.

I wrote more than half the scripts out of 26 episodes (the job on which I was also tending to another project: increasing the size of my ass), and enjoyed every minute of it.

However the strangest thing about writing an information programme for teens here is that you can't show what having an open, positive attitude is, because you can't BE open on national tv! Not about sex or moral issues anyway. 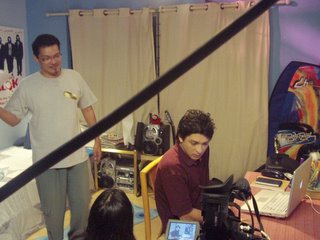 So we tried double entendre and innuendo (trying as hard as we could to keep it from straying into Benny Hill territory), and then found out that there could be no SUBTEXT about sex in the script!! That means if we tried to talk about sex without actually talking about it (nudge nudge wink wink) we would not pass the censors. Actually, we were kind of (pleasantly) surprised that they were aware of the concept, and also hoping that they won't recognise our subtext when they see it!

So our attempt to instill awareness in teens has been thwarted, and fewer kids out there in Malaysialand will know the benefits of a condom or even their right to say no.

Still, we have a fantastic young cast under the tutelage of boho geekster Na'a Murad. Yes, he's old, but he still thinks like a kid, so everyone's having a good time despite the major setbacks we have had. It's also possible we may not finish in time and may be forced to come back for re-shoots a few weeks down the line. Just for another one or two days of shoot. Booorring!

Still, Panini is soldiering on as usual, never letting setbacks affect her professionalism as the show's producer, production and location manager, floor manager and general continuity and script expert. A pack of lights and the odd coffee keeps her momentarily happy, but never long enough to sit on her laurels. 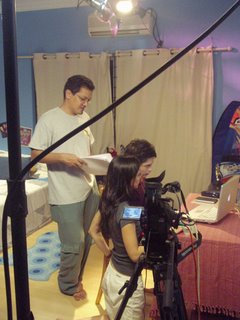 I decided a couple of years ago that 1) I wasn't good at producing, partly because of my husband losing me part of my brain (see last but one post) and 2) I didn't like doing it as much as I liked being good at it (once upon a time). So I told myself I should do what I really wanted to do, write, and my decision has turned me into a paid writer (after about 10 years of working myself towards it while keeping myself busy doing things I was good at, but not loving).

So, here are the pics. Enjoy.

Lovey, C
Ruminations by mamasan at 2:27 AM