Hear Me in Seefood

I do a little voice over work in my spare time. I have been both blessed and cursed with a deepish voice. The number of times I have been either complimented or insulted for having a deep voice served to give me a little hint: people notice it. Having dabbled in some acting, I find I love the moments of being on stage, but definitely cannot abide by the amount of time rehearsing takes away from kiddie routines.

I love that acting is seen as both something sort of noble, and also something sort of whoreish - and I totally get both! As an actor, you have to be able to be vulnerable, to let honesty bubble to the surface, to let your ego aside, in order to serve the function of acting on stage. And yet, you feed your ego simply by being on stage, you are effectively lying whilst striving for honesty, because it is in practical terms, a pretense after all.

I got a small part as the turtle in the upcoming movie Seefood, which is opening in local cinemas next week. I am very grateful to have gotten that opportunity. The film has already won awards overseas, and is a joint effort between local and international companies - you can find out more about it here, which is the blog maintained by the audio recording company which cast me (and regularly, happily, employs me).

So the theme for the premier, which is tonight, is blue and white, and since I don't have either of those colours in my wardrobe, I am going to make an outfit this morning, which will be a long blue skirt with a white and multi-coloured print, which I shall attempt to make like the following picture, except with sleeves: 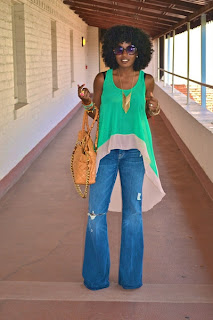 this pic is taken from here but i found it on pinterest.com.

And I will be making both pieces out of the following textiles - one is a slinky knit in aqua blue and the other is a rayony, polyestery, silky mix print. Both ae from NAgoya and cost less than RM15 per metre. 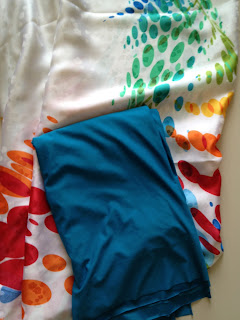 If I have time to, I will post a picture of the finished product before my night out. Wish me luck!