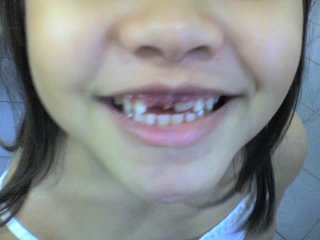 Yesterday Baby One had two front teeth extracted in a bid to save her first upper which was coming through on a bad angle. I think it may have had something to do with her falling over and smashing her mouth on the ground a few years ago. The tooth at the time was bleeding around the edges, but she survived. You may be able to see said incisor in the pic. Now, she's speaking with a weird lisp and when she smiles looks like a kitten.

Same thing happened to me when I was younger, though it wasnt a running accident and it was a canine. I was gnawing on the spine of a story book when my hands slipped and I ended up bashing my canine with it and making it bleed. When it finally emerged it was high up on my gum and I looked like a lopsided vampire. My mother thought I would be scarred for life, though I didn't really think so at the time. However, she took my future prospects into her hands and a year and a half of metalwork followed.

The first day I got my braces my gums hurt so bad that if I accidentally licked them shards of pain-like-f**k shot through my cranium. I had to drink soup through a straw. I think I survived on club lemon soda for about a week before I finally bit into something real for sustenance. Eventually, they turned out to be quite fun, except for the monthly visits to the orthodontist, who would obligingly tighten them. Worst thing about them was the damage they did to one's toothbrush and the inside of one's cheeks (yes, you can get callouses there). They gave me this weird dentists' wax, which I was supposed to press onto the braces to stop them chafing. Every time I used it, I would suddenly realise that it was gone and that I must have eaten it along with lunch. So thanks, Mum.

When I finally got them off, I kept sliding my upper lip up and down my suddenly-smooth upper teeth. It must have looked like some kind of weird lipular drawbridge. Or Jim Carrey. I did it over and over again, to burn into my mind those moments of real pleasure. Then came the plate which I had to wear for about six months, which Baby One might have to do as well. A very dainty thing which looked rather elegant, I thought. By the end of it, I could click it on and off my teeth using my tongue, and yes, it was rather disgusting. My grandmother used to do that with her false teeth (gosh, how things run in the family). I think, if it weren't for that accident, my teeth would look pretty much how they do now (I didn't inherit the canine from either of my parents). My dad, being the loving wash of support that he was, and recognising a teenager's need for affirmation, lovingly called me Canini for a LONG time. I was lucky nobody really made the connection. But thanks, Dad.

Now I've been watching Medium, and Patricia Arquette has this beguiling thing going with her teeth, and I think, what if I never had braces? But then I realise that her teeth look rather lovely, and mine... well, I looked like a lopsided vampire dog thing. So, thanks Mum and Dad for the makeover. I have the life I never had!! Interestingly, I have never come across any pictures of me and that thing in any of our family albums.

Coming up to the first anniversary of this blog in a couple of months and I'm trying to think of a way to celebrate. I think a games night is in order. Balderdash, Ex Libris (am dying to try that one) and if the evening goes stale, Twister, but only if we've all warmed up beforehand.

fell with teen2 (then a 6-mth baby) in the wet loo at The Mall - dang, she hit the floor face first! still get goosebumps thinking abt it!