The Greeks have this thing. Ancient sailors past would dream of coming home, yearning for family and PATRITHA - meaning fatherland I think.

The earliest-known book, Homer's Odyssey, tells of such a journey. Odysseus, on his way back from the Trojan Wars, is faced with trials and tribulations, trickery and time lapses, as he tries to get home to his beloved wife Penelope. Unbeknownst to him, she is being harangued by suitors hankering after her wealth.

With pressure mounting, and her so-called guests demanding an answer as to whom she will marry, she declares that she will begin weaving a tapestry, and when that is finished, will announce her suitor. Not believing their insistence that Odysseus has died or forgotten her, Penelope weaves by day and undoes her work at night, so as to delay the time to make a decision.

But I digress. The reason I am writing about a man's desire to come back home is because my man has gone away for a week. Everybody say, awwww. Although I am man-less, I am home and with our children. He on the other hand, is in a strange-ish land with friends, though for professional reasons. So it isn't an escape, nor is it a rest.

The Greeks have a culture infused with this preoccupation with returning to the fatherland. Their songs are melancholy paeans to Hellas, they dance away their blues by emulating the flight of the soaring eagle.

The ancient pathos is evident even in the way they speak now, full of emotion, and loving those depths.

So for his sake, some pictures of his girls which he may not yet have seen. Though he may only dream, this Penelope knows he will be home soon. 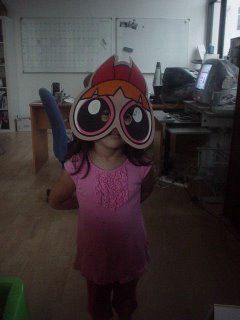 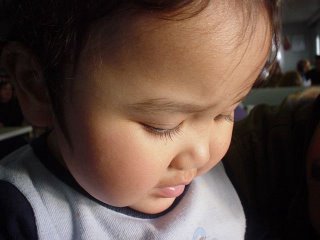 Ruminations by mamasan at 3:54 PM