Yesterday Baby 3 spent almost 3 hours awake. Last night she spit up something frightful. Today she spent almost 5 hours awake, hardly feeding, mostly watching, mouth-breathing and generally keeping an eye on me. Then we both fell asleep for about 2 hours in the early evening and now she is poised delicately on her pillow sleeping peacefully.

She looks almost exactly like both her sisters did at this time. Except I'm thinking that she really looks mostly like me when i was her age, less like her Da - both her sisters unmistakeably bore the Hubby stamp. I reckon i can claim this one's looks for myself - is that vain? :)

Here she is sporting my home-made cap (made from an old pair of yoga pants): 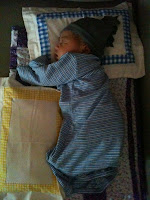 She's wearing a lite version of the gro-bag. The sleeves have fold-over cuffs which encase her fingers like mittens, and the bottom is elasticated but allows easy access for nappy changing. I got her some cloth diapers but am loath to put them on yet, because they're HUGE! We're still on disposables, and I reckon I will be for another 2-4 weeks. However I really want to give the cloth diapers a go because the amount of disposables i have used for the other two kids is quite tragic!
I think one of the reasons I am eager to have the cloth diapers work is that I am so much more willing to play mummy this time around than the first two times around. When I had my first two girls, I was still building a company with Hubby and Panini. I felt obligations that put a lot of stress on me, and I think I blamed my stress on the mundane rigours of bringing up children. In retrospect, i think it was the other way around. And, i was resistant to the idea of being only a homemaker, as if there was any indignity in that. I guess while I was ready to bring up children as characters with emotions and behaviours, I was not ready to deal with the time, routine and sheer patience required just to get them out the door in the mornings.
So yesterday she spent all afternoon in her bouncy chair courtesy of our business manager/producer ("Bus Man Prod") and his adorable family. She really liked it, and so do I! 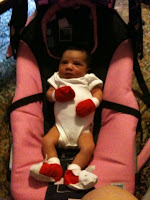 Something i omitted in my labour story, which I found very interesting. Bus Man Prod had suggested Hubby giving me "Air Selusuh" - which literally is define as "slide water". But I guess it really means water meant to facilitate or make things easier? I don't know. Anyway, as we were approaching 2 am, Hubby called Bus Man Prod and inquired about it. He was instructed to "ask the water" (a mineral water bottle he had brought back) to make the birth easy. Hubby opened the screwtop, did this and gave me some, and within an hour I had delivered. I wouldn't say my pains were eased, but the acceleration of contractions and rapid escalation to delivery was pretty spectacular!
The Greeks have a similar reverence for water, and prescribe a good drink of water after treating headache, drunk with the intention of ridding one's body of pain. Of course, physically, a glass of water will treat headache caused by dehydration. But here, the intention or purpose of the treatment is of a spiritual rather than physical nature. I am not sure if it is a Malay thing or a Muslim thing, but Hubby Boo has always subscribed to the practice, and had faith in the "selusuh treatment". I have a feeling you'll find similar beliefs in other cultures as well.
I think Baby 3 (Little Bean) is squirming now. Must feed. Burp. Adore.
Love, C
Ruminations by mamasan at 11:17 PM

Apparently air selusuh is meant to make contractions stronger thus making birth process faster. I made the mistake of drinking it while only 2cm dilated in hospital (already admitted due to low amniotic fluid) and I literally felt like I was going to die. The pain was un-buh-lieve-a-ble! Contractions was coming in at 2-3 minutes apart but still not properly dilated. Had to have another C-section.

Later, doctor and nurses scolded me for drinking it too soon. It seems should only resort to it after 7cm+ dilated. Reread my copy of "What to expect when you're expecting" and did not find any reference of this any where LOL

my wife practrice air zam-zam and kurma during her pregnancy.
alhamdulillah it took her only 3-4 hours in the labour to deliver.
6++am checked into labour room, 10am baby already out.
macam magic.

Shareen, I didn't know there was timing involved - I guess Hubby's timing was fortuitous then! i'm sorry to hear it wasn't so for you and that it wasn't in the manual!

Pye:rudz, a neat little labour process is always a blessing!

thanks for dropping by guys!

little bean is so cute.... =)
Thanks for sharing... if you feel up to it, do check out my memoir... http://brokenangelconfessions.blogspot.com
Would love to hear from you...
Hugs