More than ten years on...

...and I finally see Jamiroquai live!

I was but a teen when I first saw Jamiroquai on the early morning weekend tv music show Rage in Perth, Western Australia. I was fascinated by this sound, not rock, which was what my peers liked so much; not pop, because it was somehow more intelligent musically. Kind of like jazz, but with a pop sensibility to it that piqued my musical ears. And that little guy prancing in the desert - wow, he looked so cool.

It was either When You Gonna Learn or Too Young To Die. Oh, how I wished they would tour Australia! But I knew even then that they probably wouldn't as their market seemed very niche. I mean, how many hard core rocker would shimmy to their particular snazzy beat?

Then they went to Singapore, but alas, I had just given birth I think, and had a great dislike of flying with an infant, and so hubby boo and panini went together, and I rather maturely thought, oh, well, it was not for me to see.

And then we heard they were coming for the F1 and anyone who had a ticket could go. By now, my own daughters had developed a huge liking for Jamiroquai and I knew, we could all go watch as one genetically-linked feminine microcosm of worshippers.

We loved the opening acts, but gosh, they seemed to take too long! Not for any lack of entertainment - they were all brilliant - it's just that they weren't Jamiroquai.

Much as I would have liked to be down at the front gazing lovingly into Jay Kay's eyes, good sense told me that a) I had squashable children with me, b) it would be hot in there despite the rain, c) I am too old to jostle for attention and d) too young to miss out on the dancing (and for that I would need SPACE).

So we settled on a tiny 3' by 3' hillock and had a pretty good view from side-on, until the umbrellas went up. Guys, this is an open air concert. You are supposed to be hard. As in tough. Umbrellas? Yeah, we had one, and only put it up because everyone did. But I thought, this is silly, and brought the kids further out to a clearing from which we had a fantastic view of the stage. We shrugged on our plastic macs, stabbed the brolly into the ground, and as soon as those grooves began, I was dancing like noone was around.

I wish my pictures could do it all justice, but none did. In the end I abandoned all hope of recording mere images for posterity and immersed myself in the experience. 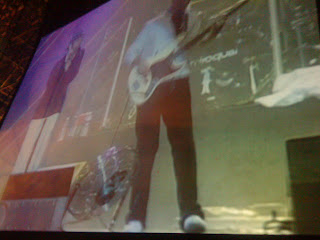 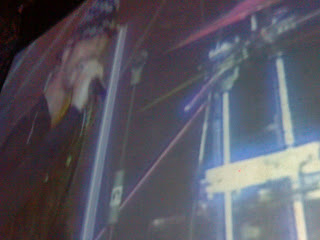 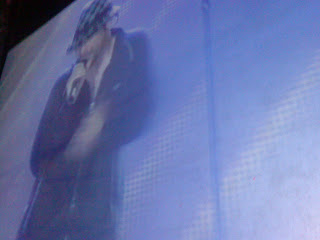 Hubby boo eventually found his way out of the civilised mosh pit to join us, but alas, after his arrival, our experience was interrupted by well-meaning fans seeking photos and a chat. You know, there is an etiquette to asking for a celeb's time when they are not working. I like Jorge Garcia's take on it (he's Hurley from Lost, and his blog is pretty cool too). Much as I appreciate fans and their support, it was hard to feel free with people standing, watching, surreptitiously taking photos (yeah, we see them do that) from less than two metres away. I don't know how he feels, but I sometimes feel like a little caged animal being viewed without permission. If you have ever felt put on the spot, you would understand. It's even worse when it's supposed to be family time. Still, they were all very polite and nice, and I hate to complain, but there is always time after the show too, right?

Anyway, the night was pretty fantastic and when I think on it, it really was a mini-dream come true. Thanks for bringing them out here, whoever you are.

until now, i'm still wondering how does he travel without moving ;)