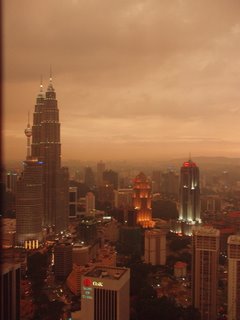 This year has been a mixed bag for me. Yes, our company has achieved lots of milestones - our first film (Los Dan Faun) went pretty smoothly, but is now faffing about in cans in the editing room biding its time till Sumolah gets underway.

That's because, even though Sumolah was our second film in production, it was meant to be our first, but then the investment deal we initially had fell through, then Los Dan Faun financing came through suddenly, so we rushed into that and miraculously got through it with less than half the preparation time we had for Sumolah. And since Sumolah got huge sponsorship from Celcom, it neeed to come first with all the hype ad the build up that even now is going on (it's amazing what word of mouth does. Even if Afdlin hadn't won any of the awards on Anugerah Skrin night, the hosts kept mentioning him and his movies, his picture kept popping up in other people's programmes up for awards... everyone has him in their consciousness and people want to see what his next offering is - they won't be disappointed!)

So now Los Dan Faun, even though it ended up being the quicker, less painful shoot, has to wait until Sumolah is in the theatres before it can be finished properly. Since I was personally involved in that shoot, I feel a little disappointed about my ignored baby. Sometimes I wish I had the knowledge to go in there and edit it myself. Although I trust my writerly instincts about what makes a scene work or what moves the story forward, I'm not sure I could properly see through Afdlin's vision. And I wish I had the freedom to try, because unless they are editing during the day, I couldn't get involved at all.

Besides my involvement in the film, my only other work has been writing, and quite a lot of it. Other than that, the last six months or so have been dedicated to the kids and resisting the ominous urge to disappear into the mummy-robot that I have had to be. I do sense that the girls, having had the pleasure of holidays with a frazzled mum, are pushing the boundaries of good and bad behaviour and know that I am at a loss about how to deal with it. So I range from confused nonreaction to hyper over-reaction. The only remedy I know is time to myself, and purposeful work. Can't wait, I will be getting help towards the end of January.

So 2006 is closing and I am really, really looking forward to the next year, expecially May, when both films will have opened and closed, and we will be going away on a long-deserved holiday.

I hope your year has been a good one and that the next will be more!

have an awesome & happy 2007, mamasan! you guys do deserve a good holiday!