I say my records because I'm not sure whether it really smashes any records, but Buli Balik's takings have reached RM1.2 mil in less than a week and I reckon that's a world record!! For Afldin Shauki and for Vision Works.

Response has been almost all favourable and I think it's because it's funny and thought-provoking at the same time. There are of course people who can't stomach it, and that's okay. There were some who couldn't stomach Baik Punya Cilok who much preferred BB and it's all okay! Feel the love, baby!

Mr Buli is out doing a BB promo roadshow, today in KLCC and Bukit Raja. Tired though he is and suffering from smoker's cough and flu, he is soldiering on for the sake of his fans and the film - because it is the film that the fans love, he that they want to see, and they that make it all happen.

Come February, we shall be having Actorlympics again for those who missed it last year. Suffice to say that we have chosen a theme for the show, which is Everything Japanese. Now we are trying to figure out how to fit everyone into one photo! Anyway, here's a teaser our erstwhile designer Isma has generated for us, just to whet your appetites... 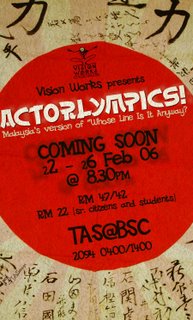 Ruminations by mamasan at 2:23 PM

I AM SO STRESSED OUT, SMOKERS COUGH AND ALL THAT MY BEST FRIEND CANNOT SPELL MY NAME PROPERLY!!!....But i'm so glad to be in her record books. Cause she is my greatest world record. heehee ;)