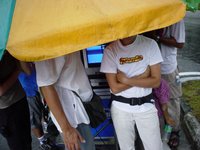 We have just started production on one of our 26-episode series for RTM called Jeff's Place - a production plagued with location problems. After our initial location bailed out on us about a week before rolling, our producer Panini (not her real name...) did a massive, heart-palpitating ring-around to friends and produciton houses begging for something big enough to accommodate a shoot.

We finally found one, a godsend, when we found out a prominent tv actress friend was renting out her house for back-to-back productions! So after one big collective sigh of relief, we went about the rest of the business of producing a tv series for kids about kids issues.

Then... JENG JENG JENG... our fairy godmother tv actress calls to say that the seemingly abandoned construction site adjacent to their house was filing up with machinery and people.

So ting-tong piling all day till sundown. We are so grateful to our entire cast and crew for agreeing so easily to changing the shoot to a night shoot. Still, time and dialogue haunt us, and even though we rolled uneventfully tonight and at quite a good pace, the going will still be slow.

So we're silently brainstorming and trying to figure out how to cram everything into our week-long shoot without causing serious stress and fractured personalities.

So, when I go home, what do I do? Bloglah! Instead of sleeping.

Lubby, C
Ruminations by mamasan at 2:38 AM