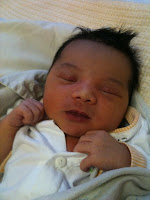 Thanks for stopping by. If you're squeamish in any way about birth, read no further. Ciao!

Last Friday morning at exactly 3am, our third daughter was born.

We've been home from the hospital since Saturday afternoon and have been blissfully sleeping and feeding and being taken care of by my mum, bless her for being here and more capable than I could be. She's been taking the older girls to school and getting lunch and dinner ready, and generally keeping things together in the household. If I could ask for anything in the world, it would be to have her health and vitality when I am in my mid 60s too.

After almost a week of having painless contractions in the early hours of the morning, I woke up at about 5 or 6 am on Thrusday morning with a dull ache in my lower back to accompany the cramping. I felt that this was the real thing, but it was mild enough for me to know it wouldn't be soon. After having a midmorning nap, I awoke to find that the pains and cramping had stopped. My mother had planned to return home that day but decided to skip the flight and wait to see what happened next.

I decided to go ahead with prior plans to visit a knitting shop in town and went along with mum and Panini and her husband K Bro. I felt amazingly heavy, and after getting some yarn and needles, we went home to get the elder girls from school. By late evening, the contractions began again, but were so irregular and painless that i disregarded them. It was about 9.30pm that they got a little more painful and regular, about 15-20 minutes apart, and about 11pm I called Hubby Boo to tell him they were getting stronger. He arrived home about midnight and we got to the hospital and were checked in by ten to one in the morning. It was at this point that we were told I was 4-5 cm dilated and about halfway to delivery. The nurse / midwife estimated a birth after 6am as long as my water didn't break.

Thinking of the long hours being awake and in pain, Hubby Boo did a snack and home run where he got me juice, ribena, biscuits, water and pillow from home. While he was away, I decide to walk the labour room and do the labour dance. I think because I didn't want to lay supine in the bed, my being upright and active began speeding up the contractions. I thought they were coming every couple of minutes, and the contractions were getting so painful as to render me various "dance" positions ineffective. I asked the nurse to put the monitor back on my belly to time the contractions, but because I kept shifting in the bed where I had to be strapped to them, the monitors kept slipping and the machine ended up not recording any data for up to half an hour.

By the time Hubby Boo got back, and the straps were adjusted for the third time, the nurses offered me various painkillers. I had been able to withstand the pain of contractions so far, and felt that with breathing I would be able to continue, so I refused. For the next fifteen minutes as I flutter-breathed through a few more contractions and he clutched my wracked hands, I think he was reminded of the last delivery where I almost ripped his thumb off with my nails, thus causing him to miss "catching" the baby at the right moment.

When the next nurse offered me painkillers again, he looked at me with such tenderness in his eyes and said, "Epidural sounds good. There is no need for you to suffer the pain anymore." I thought that was both hilarious and so thoughtful and probably so selfish all at the same time, and decided, yes I would have an epidural. We let the nurse know just as the results of the monitoring was being printed out. "Too late!" the nurse said cheerily, "baby is coming any time now. You can have the gas."

This all had accelarated within about an hour. My doctor, who up till this point thought she had a good few hours, suddenly had to hotfoot it to hospital.

Meanwhile, things accelerated rapidly, with contractions becoming unbearable. Suddenly my waters broke, which it had never done naturally before (with the other two deliveries, the doctor assisted). It was a rather unpleasant feeling, as if the baby had kicked and ruptured the bag. After that, everyone went into action stations!

The thing about gas is, it doesn't really numb the pain. It seems like it affects your perception of the pain. I don't know if that's how it's supposed to work, but that was the experience I had of it.

The last time, 7 years ago, I felt like it pulled me back into myself, as if I was looking at the backs of my closed eyelids from about 10 feet away. I felt too tired to open my eyes and my speech was slowed and slurred and scarily deep. I don't remember the pain being so bad, but it could be that my contractions were lighter, having given birth only three years before that. Now, 7 years later, it was a whole other story.

I was aware enough to know that I wanted to use my breathing to help me. I didn't want to be straining and grunting through the labour, but breathing and imagining my body "opening up" to "let out" the baby. Easier said than done, but if you can exert mental will over the physical pain, it helps tremendously to keep your body going with the flow, so to speak.

This time around, I spent less time focusing on my breathing and more time relaxing my body as much as I could every time the contractions peaked. I found it easier to hold back on the natural urge to push too early. The nurses urged me to breath the gas in continuously, rather than on the inward breath only. As soon as i followed their advice, I felt like I was about to pass out. You really go into another physical state, it is very hard to describe. However, as soon as you stop breathing the gas, the sensation disappears. What's good about it is you are in control of the effect of the drug at all times.

I was still chatting with the nurses and Hubby. At one point I said something like "hurry up baby" and "nak push now". I felt in touch with my sense of humour and self, which was nice, though I can't say for certain whether the others in the room appreciated that as much as I did.

I said I wanted to push a few times, but the nurses kept discouraging me from doing it. Then at one point, there was silence. Hey, maybe they're letting me decide for myself, cos no one is telling me not to push. So I gave in to that huge, natural, monumental urge that your body presents to you to push, and I pushed!

Now it was at this point that I realised just how much my theatre training has come to help me. Breathing exercises (I'd always had weak lungs as a child) and vocal exercises, both providing training to use the breath and the voice as modes of opening up and releasing energy from the body. They are instruments, the lungs and vocal cords, not only of physical expression but of human emotion.

So as I pushed, I felt the most epic pain of the night, and I think at this point the baby's head was crowning. At this point I unleashed the power of my lungs and vocal cords in a contralto groan that escalated into a mezzo soprano moan as I pushed a second time, and felt the baby's head come out and a moment later, shoulders, arms, legs and cord and lots of hot fluid. I could hear echoes of my vocal exultations in the corridor outside.

Hubby and the nurses cheered in exultation and suddenly, it was all blissfully over and I dropped the gas mask and peered over my bed barricades at the yelling flesh they had flipped onto the baby table. She has my lungs too! It was at this point the doctor rushed in, plastic apron and gloves on, an expectant look on her face!

She delivered the placenta and gave me two stitches. I've had little discomfort since the birth, only feeling a little weak in the pelvic area from the strain of the last few months of holding a baby in my belly.

Hubby took a video of them cleaning up the baby, which I finally got to see after returning home. Jeez, they are rough! They put a tube down her throat to get out any fluids, but I think about a foot of tubing went in! They used what looked like a cigar cutter to cut off the excess umbilical cord after they had clamped it. But she did me proud, she yelled and kicked and screamed at them till they stopped!

They brought her to me and lay her at my breast, which she immediately took and began drinking like a pro. Because i was so out of it during my last two deliveries, I didn't see my first two newborns till I was moved to the maternity ward, a few hours later. this time around, hubby and I got to spend a lovely half hour fawning over our snuffling baby and generally feeling very blessed and thankful.

Since being home, she has piled on the grams! Her foamy cheeks have tightened with her hourly feeding exertions, and her little eyes have opened to gaze blearily on our awestruck faces at least twice.

As with all our children, she has brought more love and light into our world and we are truly thankful for her health and particularly, her sleep habits. She has also awakened the nurturing side  of our older girls, who are really quite gaga over her. Baby 1 would carry in her arms all day if she could, and Baby 2 can magically calm her with her lullaby-singing.

congratulations, chris.
welcome to the world, ileana.
i wish i could pay you a visit because you live just a few shouts away from my mum's.

I can empathize with the pain since my youngest is only 4-months old and I very clearly remember the ordeal. But there is no words to express the joy when we first hear their cry. Al-hamdulillah.